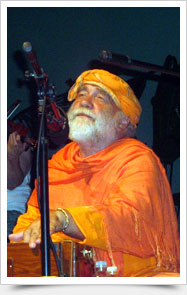 In 1949, in Trieste, a port city in northern Italy, Giorgio Kriegsch was born to devout parents: a Catholic mother and Lutheran father. His father moved his young family to Berlin for work then returned to Trieste four years later.

At twelve years old, young Georgio began playing the guitar, a pursuit he continues to this day. He later taught himself piano. After graduating from high school, Giorgio worked for insurance giant Lloyd's of London, principally in shipping goods to and from India—his first India connection. At the University of Bologna he studied agriculture and music, specializing in rock and folk music.

In 1975, Giorgio read Autobiography of a Yogi by Paramahansa Yogananda. This book transformed his life and he began his spiritual journey in earnest. Giorgio was initiated into Transcendental Meditation, and later took Kriya Yoga initiation in Holland from a visiting monk, Swami Hariharananda — a direct disciple of Yogananda's guru, Swami Sri Yukteswar.

Giorgio first traveled to India in 1986. There he volunteered with Mother Teresa's Sisters of Charity to help care for the destitute people of Calcutta. He worked massaging their extremities to provide comfort and hand-feeding those too weak to feed themselves. This caused him to become ill and he was forced to quit this work. He eventually resumed his travels in India visiting many temples and sacred sites. Swami Nirvanananda has since traveled to India more than twenty times.

During his travels, Giorgio discovered the inspiring work of Father Marian Zelazek, who was helping the children of lepers in Puri, a city in eastern India. The children lacked basic survival necessities and had no opportunity for any formal education. Father Marion was working to build a school using funds he had received from the German government after being imprisoned in Dachau concentration camp in World War II. In 2002, Father Marian was nominated for a Nobel Peace Prize for his work in India.

Giorgio asked how he could help and Father Marian gave him photos of seven children from the leper colony. He asked Georgio to seek sponsors for them. Giorgio performed kirtan (a form of devotional chanting) concerts in Italy to generate money for the Puri children; thus a new life mission was born.

In 1992, in the holy city of Jagannath Puri in India, Giorgio took the final monastic vows of sannyas and became Swami Nirvanananda Saraswati, meaning "the bliss of freedom from suffering." A swami is a monk who renounces worldly pursuits in favor of a spiritual life of simplicity and service. Merging the teachings of Kriya Yoga with the devotional aspect of Bhakti Yoga and the charitable path of Karma Yoga, Swami Nirvanananda expresses unity in the diversity of many paths and religions, all leading to the same goal: Universal Love and Oneness with Spirit.

Since that time, Swami Nirvanananda has traveled extensively throughout Europe, the United States, and India, inspiring audiences with devotional music and raising funds from CD sales and donations to help others.

Other projects that Swamiji guides and sponsors include: