What is Ashtanga Yoga? 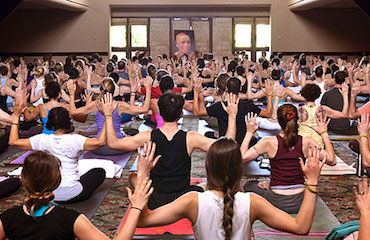 Ashtanga yoga is one of the oldest forms of yoga. It was first recorded in ancient Indian manuscripts, but brought to life by K. Pattabhi Jois in 1948. After leading the yoga philosophy department at the Sanskrit College of Mysore from 1937-1973, Jois established the Ashtanga Yoga Research Institute in Mysore, India which became training grounds for yoga teachers from the West.

Ashtanga, which literally translates toeight-limbed yoga, is influenced by Patanjali’sYoga Sutras, the principles and basic teachings of yoga outlined in 196 short versus called “sutras”. Theseeight limbswhich make up the practice of yoga, or union of the soul with the divine, includesyama, niyama, asana, pranayama, pratyahara, dharana, dhyana, samadhi.

Asana, Sanskrit for “posture”, is but one aspect of the path that most Westerners have come to know as yoga. Jois’s Ashtanga yoga is indeed bedded in tradition than trend, and it is known for its challenging nature. The Ashtanga technique is concerned with linking breath and movement, referred to asvinyasa. The advanced practice utilizes thedristi,the gaze, as a form of concentration and thebandhas, internal body locks, which assist in holding some of the more labored poses. There’s nothing fancy about the Ashtanga practice – no props, music, or extraneous instruction. The emphasis is in remaining present in the moment. Ashtanga yoga encourages the practice of alleight-limbstaught in Patanjali’sYoga Sutras, however, leading to the ultimate “goal” of self-realization.

Watch a session of Ashtanga Yogaled by its founder,Pattabhi Jois.