​Choosing the Right Mala for You 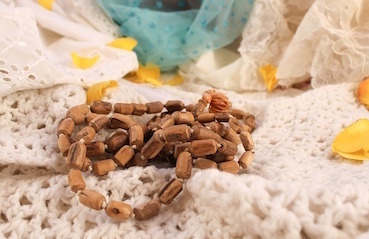 Mala beads are meditation tools that have been used for thousands of years. They encourage us to pause, breath, and realign with our deepest intentions and are reminders to invest in moments of grace and self-care. Think of them, if you will, as spiritual forget-me-nots.

The use of mala or prayer beads is common to many religious and spiritual traditions. Known as malasto the practitioners of Hinduism and Buddhism, we also see them in Christian practice as the rosary, used for repetition of the Lord’s Prayer and the Hail Mary, a prayer of intercession to the mother of Christ. Malas are also used for counting out various types of pranayama.

Malas are symbols of the never-ending cycle of eternity. They are often used to aid in the practice of japa meditation which is the repetition of a mantra or prayer. A mantra may be a series of words or syllables, or a single word or syllable, such as ‘Om’, which is considered to be the source of all mantras.

Mantra is a Sanskrit word which consists of two syllables, ‘man’, meaning mind and ‘tra’, meaning tool. Mantra can be translated as ‘instrument of thought. ‘Tra’ also comes from ‘trayoti’, which means liberation. Another translation then is ‘an instrument which liberates one from the mind. By focusing on a mantra very deeply, the practitioner can become detached from his/her thinking process and uplifted into a highly relaxed state.

Malas can be made from various sacred woods and stones, each of which has particular qualities:

Using Your Mala for Meditation:

Meditation produces a clearing of the mind in ways that promote a sense of calm and heightened awareness. Hundreds of studies suggest that meditation doesn’t just decrease stress levels but that it also has tangible health benefits such as improved immunity, lower inflammation and decreased pain. Additionally, brain-imaging studies show that meditation sharpens attention and memory. Perhaps most importantly, it has been linked to increased happiness and greater compassion. There are many different ways to meditate, such as using a mantra, looking at an object, or focusing on the breath.